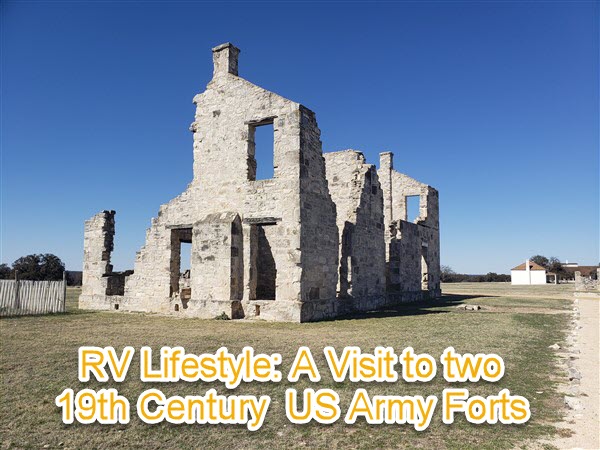 Or as they say in these parts, “the war of northern aggression!”

Greetings from Dalhart, Tx as I post this on April 12…

Dalhart, WHERE? Yep, I’m still in TEXAS – but I’m getting real close to Oklahoma (31 miles) and Colorado (66 miles) – yep Colorado and Texas almost connect! Dalhart is in the EXTREME NW corner of the Texas Panhandle. Today was warm (about 80), but an arctic outbreak will drop temps. back to near/below freezing at night and only in the 50’s for the daytime for the next several days. This gives me time to share more about my journey. This post centers around an inspirational experience at two 19th Century U.S. Army forts – read on for details…

Sightseeing to me is such a superficial term. For me, visiting places like these 19th Century forts is a way of connecting with our past. Our heritage if you will. And while we all know that humans (then and now) were/are flawed, there is value in understanding what happened, why it happened, and how things evolved since then to where we are today.

As an RV traveler, I feel blessed to have traveled (and continue to travel) to varied and often remote regions where you can see evidence of recent (and ancient) events that impacted the land and/or our Nation.

This experience involved two 19th Century U.S. Army forts. Being on the premises brought to life events in our nation both prior to and following the Civil War. In this post, I attempt to chronicle events that impacted segregation in our nation after the freeing of the slaves along with more than one move to desegregate our nation.

Fort McKavett, situated near Sonora, Tx. is located on the boundary between west Texas and the Texas hill country and Fort Davis, near Alpine, Tx. right in the middle of west Texas – surrounded by mountains reaching to 7000 ft. elevation in an arid, semi-desert region.

Both forts existed to help facilitate the westward expansion of our nation and address the “Indian problem” (as some Americans in the 19th century saw it) during the Indian wars which lasted from about 1850 – 1875.

Fort McKavett was first established in 1852 only to be abandoned 7 years later in 1859, due to a decline in warfare with Indians as a result of the establishment of reservations in Texas and migrants using a more southerly route to California.

In 1868, after the cessation of hostilities with the Confederate Army, the U.S. Army reopened Fort McKavett and in part it was designed to serve as a military post to address hostilities between local Comanche Indians and the settlers which increased after the end of the Civil War. Interestingly, the Indian Wars continued during the Civil War.

From 1868 to 1883, Fort McKavett served as a major supply depot providing food and provisions to the entire region for multiple purposes. By 1875, the Indian wars ended as most Indians were relocated to reservations. The fort was abandoned 8 years later in 1883.

Starting travel for the ’21 “RV Season”? Need Accessories? I’ve outlined a few that I personally use and find quite helpful…

It is interesting to note that after the slaves were freed at the end of the Civil War, blacks were allowed to serve in the U.S. military – both as infantry and cavalry. To this end, all black regiments were created as the U.S. Military was completely segregated at that time. Portions of all 4 regiments of black soldiers, known as the “buffalo soldiers” served at Fort McKavett.

Interestingly, while soldiers were segregated during the day, in the evenings, music brought the races together as racially integrated musical groups formed to entertain troops and civilians in the evenings. Perhaps this was a first move towards racial integration after the war.

I can’t find documentation to support this, but I believe I’ve read that the U.S. Military began to integrate in the post-Civil War period of the late 19th Century – UNTIL – one of the biggest racists of the 20th Century, Woodrow Wilson took office (of the Presidency) in 1913 and re-segregated the army. The U.S. Army then remained segregated through FDR’s administration (another massive racist) until President Truman issued an executive order in 1948 finally desegregating the military.

To further support evidence of 19th Century desegregation, the KKK, infamous for anti-black racism was virtually disbanded in the early 1870’s after President Grant issued the KKK Acts of 1870 and 1871. These acts allowed Grant to go after the KKK with military force while giving former slaves rights and protections. It was again not until Wilson’s term and his severe racism that the KKK once again began to flourish and grow.

Back to Fort McKavett, in 1868, shortly after the Army left, civilians moved into the vacant buildings and Fort McKavett – the town, was born. The last of the town of Fort McKavetts residents moved out of the original buildings in 1973. It is this prolonged period from the closure of the fort until the mid-20th Century, during which people occupied the buildings that helped to keep them in the excellent condition they are found in today. In 1968, the State of Texas designated Fort McKavett to be a state historic site.

After a couple of hours spent exploring Fort McKavett, learning more about 19th Century history in this region, and imagining what life was like in the period just prior to automobiles, electricity, and planes – really the last period that more resembled ancient Greece than today, I headed back to Sonora and prepared to visit the border. Incidentally, my “border post” has received MUCH comment and praise for the information I share and the manner in which I share it. If you visit the post, I welcome your feedback – as with all my posts!

When I headed to Fort Davis, at first it didn’t register. It was only after a conversation with one of the NPS (National Park Service) rangers that I realized the DAVIS this United States fort was named after was none other than Jefferson Davis – the President of the Confederacy!

HOW does a U.S. fort get named after a Confederate president? Answer – Jefferson Davis was United States Secretary of War in Washington DC in the 1850’s and it was under that title the fort was named after him.

Interestingly Fort Davis is located in “Jeff Davis” county (in west Texas.) The county was named and established by the Texas Legislature in 1887. As this was just over 20 years after the end of the Civil War, I suspect it was kind of done as an “up yours” to the federal government as there remained much antipathy towards D.C. after aggressions associated with the Civil War ceased. I also found it interesting that the Texas Legislature used the familiar term “Jeff” instead of “Jefferson” when naming the county. Moving towards more recent times – Fort Davis was established as a national historic site in 1961.

Situated about 275 miles west of Fort McKavett, Fort Davis had a similar history to its eastern neighbor. It appears that some of the same buffalo soldiers served at both forts. Fort Davis was founded a couple of years later (1854) and was likewise abandoned during the Civil War – though it was briefly occupied by Confederate soldiers during the war. It was also re-established after the war (1867) to control the region as the Indian Wars continued until 1875.

Starting travel for the season? Here are two OUTSTANDING Campground Discount programs that will help you to stretch your travel budget… You can access my report HERE.

Jefferson Davis had big plans… that didn’t work out (and this was NEWS to me!)

It is worth noting that Confederate soldiers occupied the fort from 1861-62 with plans to push westward and create a route leading right to the Pacific. This may have been Jefferson Davis’ attempt to show potential European allies he had control of the American west. He was defeated however at Glorieta Pass in New Mexico in 1862 and subsequently abandoned his attempt to conquer the American west. (All this history was news to me when I learned about it!)

After the war, the fort was occupied until 1891 at which time it was decommissioned. It then lay mostly dormant and began to decay. There were some attempts to rent the buildings, and even use the site as a movie set in the 1930’s but the Great Depression caused those plans to fall through.

Despite these challenges, Fort Davis is well preserved and is very much worth the visit. I invested a couple of hours at this fort as well. The hospital was particularly interesting to visit to see what medical treatment was like in the 19th Century.

Fort Davis is also a town with a couple of restaurants and an RV park. It is only about 20 minutes away from (far larger) Alpine, Texas. It was Alpine where I spent a week and from which I traveled to Fort Davis and later to Big Bend National Park and made my 2nd visit to the border.

If you enjoy the content here, please consider subscribing to my newsletter to be notified of new posts as they are released…