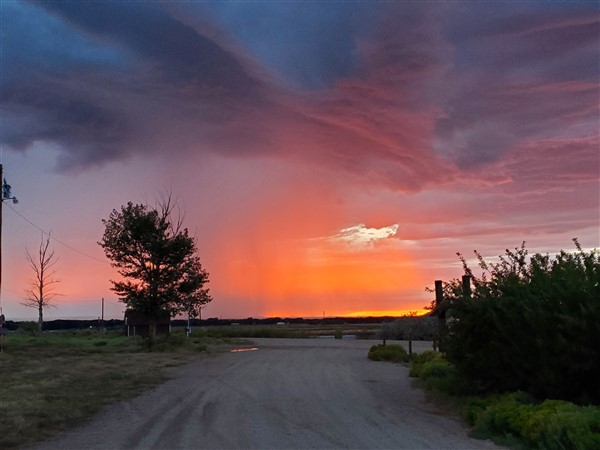 I’m back on the road – at least for a few months. After two months in Edgemont SD, I left at the end of July, traveled to Casper, Wy (stayed 9 days), then Saratoga Wy (2 weeks), now Rock Springs (the arm pit of Wyoming!) for 1 night. I’m on my way to Ririe Idaho, with plans to spend some dry camping time after Ririe in the Wind River Mtns. before heading “down” to Utah likely for the winter.

While in Saratoga, naturally, I soaked (in the hot springs) every morning. This morning, Aug. 22, I got there before 7am when the temperature was 46F – LOVING IT! Cooler mornings as the days get shorter and summer begins to wind down. Its now mid-day in Rock Springs, 85F, but no humidity.

Much of my time in Saratoga this trip was spent reading, relaxing, soaking (world class hot springs), and exploring the Snowy Mountain Range. It’s not so snowy at this time of year, though I did see some patches of “old snow” (last seasons snow) hiding in crevasses and canyons high in the Snowys.

I had the opportunity to paddle in Turpin Reservoir (elevation 9400 ft.) and Mirror Lake (10500 ft.) Both water bodies are PRISTINE high mountain lakes with crystal clear water and spectacular scenery. Saratoga Lake this go around (I typically visit Saratoga 2x each year for about 2 weeks each visit) was not the water body to paddle in. I learned a few days after arrival that there was at least one (and likely) two TOXIC ALGAE blooms – and according to a researcher from U Wyoming, they’re nasty species.

Based upon her advice, I decided to forego any paddling in Saratoga Lake this time, and since the town and fish and game didn’t post the results of their July water tests, I did my part to let visitors know to be careful – especially with dogs going in the lake.

To the town’s defense, they did post a “be on the lookout for” sign that stated this lake is prone to toxic algae issues, but I believe that further signage was warranted as a bloom (or two) has been found. The DEQ (Dept. of Environmental Quality) has a webpage that details all Wyoming lakes and any that have issues. The link can be found HERE. My video (above) details how to use this site.

As the weather cools – IF you plan to RV Camp in the winter… here’s my thoughts on RV Skirting (and where to get a great one!)

Inspiring Video of the Snowy Mountains

I will be posting (soon) inspiring webcam footage of the Snowy Range – particularly the roads leading to Turpin Reservoir & Mirror Lake. They’re both worth visiting – and along the way, I may just have a few surprises for you! Stay tuned!!

A friend suggested I do one (or more) posts highlighting the best photos I’ve taken over the years. I thanked him and believe his idea has merit. (What say you? Feel free to post comments below!)

As I started my first “photo essay post”, I decided to link the photos back to the original posts. As soon as I started my work, I found a post detailing my first winter in an RV in Steamboat Colorado – and discovered a video in which I was MUCH younger – that had garnered over 350,000 views, but it was on a youtube channel that I no longer use. So… I’ve moved the video to my current YouTube RV Across America channel, and updated the original post from 2013 to include LOTS of new info. I’m planning to re-release this post soon as it shows some interesting change in my views and knowledge over the past decade.

I am also working on more posts that address quality issues in the RV industry – an issue that gave rise to my Concierge RV Buying and Selling Service, which continues to grow 4 years later! I plan to discuss the latest consolidations and consumer attitudes that feed the industry’s worst players. Another issue I plan to discuss with you is avoiding the pitfalls of trading in your current camper for a new one – and a current look at the RV industry when it comes to buying a camper these days.

Like my content? Please leave a message to me below AND consider signing up for my newsletter to be notified of new posts…