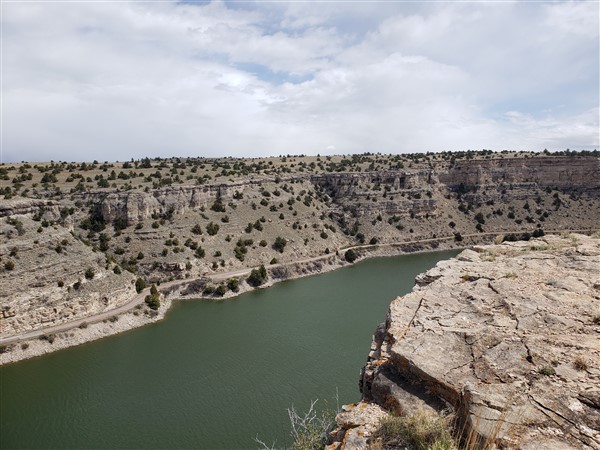 I never cease to be amazed at some of our nations State Parks – often FAR less visited and crowded than our National Parks, and in some cases JUST AS spectacular as some of our best National Parks. This is the category I’d place Guernsey State Park within.

Located right next to the town of Guernsey, Wyoming, situated in eastern Wyoming on the western fringe of the Great Plains, Guernsey State Park is located in a “zone of transition” where the physical or geographic relief at times resembles that of the Great Plains and in other parts of the park, it is more like the Laramie Mountains situated just to the west of the state park.

I’ve been exploring this place along with the town that bears its name and the overall surrounding region for the past several weeks (featured HERE in a recent post) as I ride out “the virus.” The town of Guernsey itself is a small, quiet town with friendly folks who enjoy the freedoms that come with living in the state of Wyoming.

The core of Guernsey State Park is home to Guernsey Reservoir or Lake Guernsey. The reservoir is dammed close to the southern end of the park – and – this is important – due to water rights agreements, the dam is fully opened twice each year and the reservoir is completely drained. One of those drainings occurs each year in July, just after the 4th- so beware – for much of July, your campsite will NOT be water-front. Instead, your site will sit along what turns into a giant mud pit – no swimming, no boating, etc. This is done for 3 weeks then it is refilled. As a result of this regularly scheduled activity, there’s also no fishing in the reservoir – they don’t even stock it as this semi-annual draining would simply send the fish downstream to Nebraska! The second draining often occurs just after Labor Day in September. Check with the park for the latest schedule of this activity.

I’m here now, visiting the park in April and May (2020), so an empty reservoir is NOT an issue at this time. There’s plenty of water, and within 10-15 minutes from town, I can put in my kayak and paddle around for as long as I like. I’m not camping in the park as camping is prohibited due to the virus, but there’s a lot of RV Camping info coming later in this article.

As I write this, I just returned from an area called Sandy Beach after a paddling session that lasted for over an hour. As you explore the region, you’ll discover that portions of the reservoir are surrounded by limestone and sandstone cliffs – which are truly majestic and give those parts of the park a truly “national park feel.” Signs of an ancient shallow ocean?

There are LOTS of campsites here! Well over 200 to be sure. And – MANY are waterfront. But… beware – if you have a larger camper, you must limit where you can travel within the park and how you enter. You have to be selective regarding the sites your camper will be able to access. Read on for more details on these issues.

First, let’s talk about camping – RV and tent camping. The park has separate tent areas for those who choose to camp in a tent. There are several areas of the park where you would not want to take a camper (of any kind!) So for those, tent camping is the only option. Reserve America can assist with identifying which sites are appropriate for RV’ers and which can accommodate longer RV’s – as NOT ALL CAN! In fact, this park was part of FDR’s CCC project, so many sites and camping areas were designed only for shorter (25 ft and under) campers. That said, there ARE some great sites for longer campers (including the 40+ ft. beasts) – I will touch on that shortly.

Most RV campsites in Guernsey State Park are dry camping sites. This means you’ll need either solar panels or a generator to operate your camper and the appliances within for long. I share thoughts on my solar power setup HERE and advice on the generator I selected for my own use HERE.

Wyoming has developed a fee system that separates day use from overnight use. For example, for non-residents of Wyoming, the day-use fee is 9.00 (summer rate) and the overnight rate is 16.00 (for the site, if its a water/electric site, add $10./night) So, a campsite for a 24 hour period is 25.00 (add 9+16.) You can save if you plan to spend some time in Wyoming State Parks by purchasing the annual day pass for 70. (non-resident rate), so holders of that pass only pay the 16. fee for a dry camping site. Be aware that the annual pass is NOT a 12-month pass, it expires on Dec. 31 regardless of when you purchase it during the year.

Guernsey State Park – a South and a North Entrance

The South entrance is closest to the town of Guernsey and is located just off U.S. 26. Guernsey incidentally is about 1/2 way between Wheatland to the west and Torrington to the east. The nearest large towns are Casper (90 minutes northwest), Cheyenne (just under 2 hours south) and Scotts Bluff, Nebraska (90 minutes east.) You can literally access most of the park within minutes of the town of Guernsey.

Upon entry from the south, you’re presented with a choice – go north to Lakeside Drive, which runs (roughly) north-south along the east side of the reservoir or go west (then north) towards Sandy Point (the west side of the reservoir.) If your camper is much over 25 ft. do NOT go to Lakeside Drive. A couple of miles from the entrance, Lakeside drive has a 45 ft. restriction for the COMBINED length of your vehicle and trailer!! Drive it without the camper and you’ll see why – just don’t drive it too fast! The road towards Sandy Point and many of the campsites on the west side will accommodate larger campers.

Sandy Point and the west side of the park

When you do make the turnoff towards Sandy Point, you’re greeted with a spectacular drive that allows you to access more than half the park’s campsites – many of which (again) are waterfront. AND to emphasize – if you have a larger camper, upon entry from the south, this is the ONLY safe route.

Sandy Point and a wealth of other camping areas are just a few minutes up the road – I’d estimate it’s about a 4-mile drive from the south entrance to Sandy Point. En route, there’s also the Skyline camping area – a higher location, not near the water, and at this moment (though it may change) is a “first come-first served” camping area. Most of the waterfront campsites are reservable – which means you must use Reserve America (and pay their fees!) to reserve a site. There’s no advance requirement, as long as the site you want is available. So, in theory, you can drive to the park (any state park in Wyoming), get to a site, and then you must check to see if the site is reserved in the online system (of course, this requires an internet connection or at a dead minimum a smartphone with a cell signal. Cell signals are available (for Verizon at least) in much of the park, though I HAVE encountered dead spots.

The only water and electric sites I’ve found in the park are located in or near Sandy Beach – and are NOT located along the waterfront, though the water line is not far.

The west side (Sandy Point side) of the park is also home to some great cove’s and to the “Castle” – a CCC era building, erected for $6000. by “FDR’s workforce”, with an estimated cost of about a million to build something like it today! Its largely a rock structure that serves as a somewhat sheltered picnic area. It REALLY is interesting to see and there’s an outhouse near it that is also from the 1930’s era. As I’m 61, and a history buff, I find these dwellings interesting – and it’s hard to believe they’re approaching being 100 years old!

There is a way to travel from Guernsey (the town) to the North Entrance without ever entering the park. It uses roads located east of the park. These roads are definitely big rig friendly and you would choose to use them if you plan to camp at the north end of Lakeshore Drive. Long Canyon East Campground does have a nice camping area very close to the water that will accommodate large rigs. You’ll want to exit the park via the North Entrance as well instead of using Lakeshore Drive.

One thing I’ve become sensitive to is the fact that we ALL try to camp on a budget. Lately many state parks from my experience have actually become quite expensive to camp within. At $16. for a night (assuming you’ve purchased the annual day pass for Wyoming State Parks) the costs are on the high end of what I’m comfortable with for dry camping. At $26 per night for water and electric, that’s a competitive rate.

So, how can you keep your camping costs to a realistic minimum? Certainly, if you’re a “seasoned citizen”, be sure to get the Lifetime National Parks Pass at a cost of $80 – age 62 minimum. Here’s the rub… It’s good for FAR MORE than National Parks! You’ll encounter many national recreation areas and national forest campgrounds where you’ll pay HALF PRICE! Additionally, there are two RV Discount programs I recommend – they can be found in an article I wrote HERE.

Lastly, the ability to DRY CAMP (camp without electric/water/sewer hookups) will help you to SAVE big! Two tools that can be helpful are solar power and a generator. If you click the linked text, you’ll find articles I have written that discuss my preferences in each area (and some background on what to expect when you get panels and/or a generator.)

If you found value here and would like access to new articles as they emerge, please do join my newsletter below…