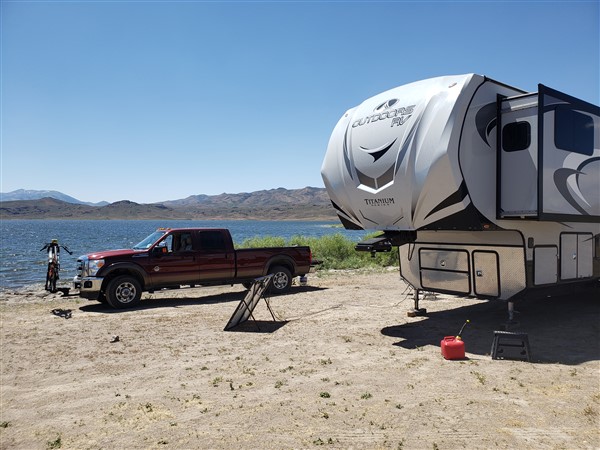 Recent travels brought me from Ely and Wells, Nevada to Elko and then a turn to the north – thank God I’m back at higher elevations! It’s FAR more comfortable than living at 2000 ft. in Las Vegas in July!

Ely is at about 6400 ft., Wells at 5400 and Elko at 5000. All sufficiently high enough to avoid the absurd heat of Vegas! Elko has some nice restaurants and coffee shops, but like most towns in Nevada, it has a “cheesy” atmosphere with the casinos – JMHO.

Where to Stay (RV Camping) in Elko, Nevada

While in Elko, I stayed at Valley View RV Park – full hookups for $14/night! How do I find these places? AllStays and Campground Reviews. Valley View is just east of town, alongside I-80. It actually has a really nice laundry on-site with fair pricing and is easily navigable. It’s about 2.5 miles east of the towns east end, but the road is clear and it’s an easy drive. There is a Smiths on the west side, and yes, a Walmart, so there’s plenty of commerce in this town of 18,000 (far larger than Wells and Ely.)

My main focus while in Elko was to restock the fridge, check out South Fork – a nice reservoir about a half-hour outside of town, but it turned green (algae) from the consistent 90+ temperatures over the past few weeks. So, after a few days in Elko, I proceeded north on 225 to one of the most desolate wilderness regions in the nation. I seem to have found several of those lately!

For 70+ miles as you travel north from Elko Nevada, there is virtually nothing – save for one restaurant/bar about 45 miles north of Elko. When you arrive at Wild Horse Reservoir, you’ll find a “resort RV park” – restaurant (Weds-Sun only) and bar (most anytime) on your right. The reservoir is on the left. The resort RV park is NOT where you want to camp!

You’ll see the reservoir on your left. As you proceed nortward, shortly after the bar/restaurant, there is an entrance to the State Recreation Area – it is just ONE of your camping options in this area and NOT the one I chose. They charge $15/night, offer no hookups (there may be “communal” water hydrants), but each site does have a picnic table and a canopy. The sites are NOT right on the water – a personal preference of mine. And as with most state facilities everywhere, you’re limited to 14 days.

Just north (a matter of less than a mile to as much as 2 miles), you’ll see more campers (if its summer) “parked” alongside the water – and during the week many appear to be “abandoned.” These campers are parked on BIM land (Bureau of Indian Management.) The BIM charges $6 per day ($7 in the camping area with a paved road), $30/week or $75/month. My guess is that many of these campers are owned by “weekend warriors” who travel from Elko to relax at the reservoir and return home, leaving their camper behind and stationary all summer. There are no hookups of any kind at these camping areas – but for six bucks a night I’ll take it!! While you’re NOT on an Indian Reservation here, the Shoshone – Paiute Tribe of Duck Valley (just north) has purchased this land and manages it.

I stayed at Wild Horse Reservoir a few nights, thoroughly enjoyed the solitude and desolation – kayaking twice a day – at sunrise and sunset (check out some of the photos I took!) At 6200 ft. elevation, days were quite warm, though not hot; and nights got actually chilly by dawn!

Cell Service – despite the remote location AT&T worked well (most of the time.) I suspect on a weekend, with more users, it will max out. Verizon was out-to-lunch in this region.

I created a video of Wild Horse Reservoir depicting my lifestyle there. I welcome the feedback…

I mentioned Renogy Solar Panels in the video. If you want to check them out – click HERE.

My next adventure in my ongoing journey took me north to Owyhee and Mountain View Reservoir, which is where I am now – Mountain View Campground. Mountain View Campground is situated in Idaho, approximately 3.5 miles north of the Nevada border, and 1.7 miles west of 225 on a gravel (and washboarded) road. The campground has communal (shared hydrants) water, pit toilets scattered about and 30A electric at each site for $15. per night… not a bad deal! There are also dry camping sites here – I had my eye on one RIGHT ON the water, but with afternoon highs reaching 95, I’m a lightweight! I want my air conditioning!!

The drive from Wild Horse was short but interesting – just north of Wild Horse Reservoir, you enter a NARROW valley. It’s ok for full-size campers as 18 wheeler trucks go through there all the time. You will need to SLOW DOWN and a 30-mile drive to Owyhee will take you a solid 45 minutes with trailer in tow (or motorhome.)

The Shoshone-Paiute Tribes combined to live on the Duck Valley Reservation – which legally is considered to be a sovereign nation. They have a grocery store in Owyhee (about 30 miles North of Wild Horse Reservoir) with amazingly fresh produce and very fair prices considering we’re 100 miles from the nearest town of any real size – and NO sales tax! They also sell fuel – again at very fair prices – and they’re the only filling station for 100 miles in either direction. There’s only one road here running north-south.

As you proceed north from here, the first town of significant size is Mountain Home, Idaho. Owyhee also has a REALLY good deli and a reasonably well stocked Ace Hardware. The stores are all located on the same site, approximately 1/2 miles south of the Idaho border in Nevada. Technically this is still a Pacific Time Zone region, however the tribe has opted to live on Mountain time – regardless of which side of the Idaho – Nevada border you’re on – as long as you’re in the Duck Valley Reservation. And remember, as I noted earlier, this reservation is a sovereign nation – follow their laws or expect to run into challenges with their authorities.

The one thing I observed is there is very little commerce going on within the reservation other than what I noted earlier. I spoke with a local who first advised me that there has been theft at the campground I’m now at. He cited 2 specific circumstances he was aware of. Why? He says, and I tend to believe him, there is a serious drug and alcohol problem among the Indians living here and jealousy over “haves” vs. “have nots.” I know the US government created these reservations, but good intentions sometimes (and with government intervention often) produce undesired results. For the libertarians reading this, I know that observation comes as a shocker!

While the reservation does have fuel, grocery, deli and again a fairly well stocked Ace Hardware, frankly there is SO MUCH MORE this area could support (with a population of about 1000, and this settlement is the ONLY real town for 100 miles in either direction.) More commerce as I see it would act to raise the standard of living of many of the local residents. Just as an example of where “money is being left on the table”, my truck decided to show a “check engine” light while I’m here – the nearest place to get this addressed is either in Mountain Home or Elko – again, 100 miles in either direction! Yep, there’s NO auto-truck repair shop here.

I don’t mean to drag on with what I see here, but I’m trying to give you an idea of what life here is like. For me at least, its the first time I’m actually “living” on an Indian Reservation – if only for a few days.

I will say, by all appearances, this campground is a very peaceful place. The residents of the campground do look out for each other. I met a naturalist who’s camping here for 2 months and he seems to keep an eye on the comings and goings-on here.

As for me, I’m out kayaking (twice each day!), I went swimming today as well, there’s great fishing (not for me!), and stores mentioned earlier are less than 10 minutes away – I’ve made a few excursions there for “stuff.” Again, I’m really impressed with the grocery store! Great produce and meats and the prices almost match Smiths (my “go to” market when it’s in the town I’m in.) Smiths fyi is Krogers.

A couple of other interesting points about Mountain View Campground – the sites are near the water, but not ON the water UNLESS you want to dry camp. With the heat as I noted earlier, I opted for electric sites. Payment is made at the ACE Hardware – and you can even call them and reserve a site. For the middle of summer, this campground is definitely UNDER utilized. One other peculiarity – there appears to be no dumpster at the campground (unless I’m blind – which IS a possibility!) I brought my trash back to “town” at the grocery – and again failed to find a dumpster! But, there are 30 gal trash cans in front of the grocery and deli. Verizon cell signal here is excellent (the world is right-side up again! AT&T is just “ok”.)