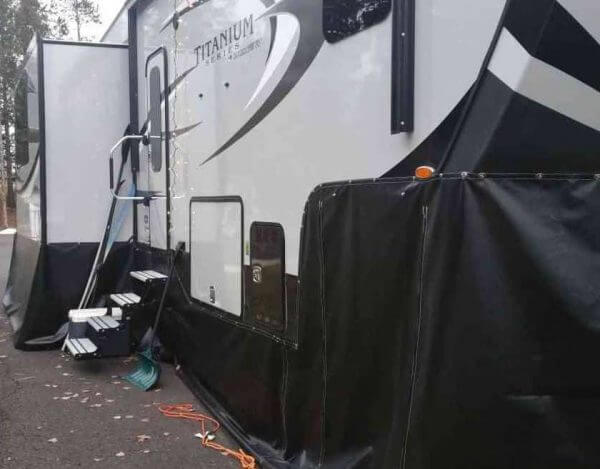 After 8 years “on the road”, you’d think I’d have this “winter camping thing” with RV Skirting down, right?

Note: I originally posted this in Nov. 2017, I’m updating it today (Sept. 2018) after using my skirting (detailed below) for a full season AND breaking it down in late February when parts of it were “melded” to the pavement with ice acting as adhesion – this story is detailed farther into the post.

You see… I’m a full timer AND a skier and I work at ski areas (instructing) for the winter to help fund my travel addiction! As a full time traveler in a 5th wheel (and now a REALLY GOOD fifth wheel!) I KNEW from the first winter in Steamboat in 2012 I’d need skirting as a way to keep my plumbing (and entire underbelly!) from freezing up and my propane budget from going through the roof!

My initial solution (with my 2011 Crossroads Seville) was blue-board (insulation board). Effective and inexpensive BUT bulky, VERY labor intensive (see my old videos/posts when I talk about this approach) and virtually impossible to transport once you break it down in the spring.

This led me to a search of companies that provide custom RV skirts as well as “do it yourself” kits. Acknowledging that I am “mechanically challenged”, I rejected all the do-it-yourself options for a variety of reasons – starting with the challenge of ordering the right amount of material and connectors. Significant mistakes at the outset of a do-it-yourself project will quickly erase any savings of time and money over a custom skirting company. I was also reasonably concerned about damaging my RV if I were to attempt screw-in snaps, and had real concerns about the effectiveness of suction cup strategies touted by some do-it-yourself companies.

Even among custom RV Skirting companies, there’s a wide disparity over how they do it

While costs are fairly uniform; I received quotes ranging from 1900. to 2500. for my trailer, the approach among custom RV skirting companies varies. Some use just snaps, some use a combination of turn buckles & snaps (the videos I share below help to explain this) and some use a channel (or rail) system.

Channel or rail systems are not widely used and I know of some rv’ers having problems with them, so I passed on this approach. As to snaps vs. snaps and turn-buckles, I learned in my research that the turn-buckles, when used strategically (at high stress points) are better than just snaps – which when over-stressed can (and will) fail.

Ok, enough commentary! Allow me to share a few videos that were created largely as my rv skirting was being constructed. This first video illustrates the process of measuring and planning out the two day project. The technician’s name is Zach, and the business I used is Extreme Covers.

Considering RV Skirting for YOUR Camper?

If you decide to get RV skirting for your camper and you like the approach you see in the videos below, contact me and I’ll get you a very competitive quote. I’ve negotiated a discount with the owner for all my readers! Use the contact (reply) box below – or – email me directly at traveler@rvacrossamerica.net.

Late on the 2nd day, Zach’s work is nearly done. In this next video, he is instructing me on various aspects of the skirting. Take note of the features built into the rv skirt and in particular how small it is when it is folded up.

Video 4 below introduces you to Dave – owner of Extreme Covers. As you’ll see, he’s quite a character, and the demo he has me do with the skirting was neither planned nor staged!

If you find value in the content and wish to subscribe to RV Across America (.net), look for the box that says “Want Regular Updates?” – enter your first name & email. You’ll receive updates of any new posts or news I post here! You can also join in on the discussion in my Facebook RV Lifestyle group.

The only thing really left to show you is the finished product – which can be seen in the 5th and final video in this post.

Summary of my experience

Extreme Covers does a first rate job creating & installing RV skirting. The work required 2 full days (and Dave tells me that some trailers / motorhomes require 3 days) – you CAN stay in your RV while the work is being done, and they will do the work onsite in Boise, Idaho OR in parts of the adjoining states. They will charge a travel fee if you opt to have the skirting done off-site. For me, I opted to come to them and save the travel fee. I found it easy to get in/out of Boise (they’re less than a mile off the “Connector” (Interstate 184) and their lot is easy to navigate and is secured. While there I took a couple of bike rides along the Boise bike path that runs adjacent to their property. (Remember – my readers get a break on the price – so, contact me directly for a quote – traveler@rvacrossamerica.net)

As I mentioned earlier, if you’re looking for a RV skirt for your camper, contact me and I’ll be glad to get you a quote – as one of my readers, you’re going to receive a discounted rate.

Folks often ask me “hows it holding up?” Well, after two ROUGH winters, its holding up VERY WELL. Remember – its not just the skirting, its the snaps and turnbuckles. If they fail, they can damage your camper – mine are doing JUST FINE.

Further, towards the end of my first winter (February 2018), I elected to leave McCall, Idaho early. I struggled to free the skirting from the pavement as ice had “glued” the skirting to the pavement! It took LOTS of force to separate the two (the skirt and the pavement) – I succeeded at freeing up the skirting and there was virtually NO damage despite using massive amounts of elbow grease to free up the skirting.

Bottom line… this skirting is GOOD STUFF and while these guys are NOT cheap, they are THAT good!

While you’re here, there are a number of posts where I talk about preparing for the winter months (if you camp in colder weather). You can find an index to my winter in a RV posts HERE.

Considering a NEW (or “new to you”) CAMPER?

I now offer a Concierge RV Buying (and Selling) Service. The goal? To save YOU time, money, and aggravation – and get you the RIGHT camper at the BEST price.

As a full time traveler, I’ve found two memberships worth having. One is about to raise their prices, but they have an interesting offer to remain at the old, lower rate for life – see HERE for details on both.

May I suggest… Looking for a great navigating and trip planning tool?

I use something called AllStays – how I use AllStays is illustrated in this post about camping in the Helena Montana region. When I start my planning process, I always start with AllStays to see what campgrounds are in the region I’m considering. The database is interactive so I can learn more about the campgrounds AND other aspects about the region I’m planning to visit. 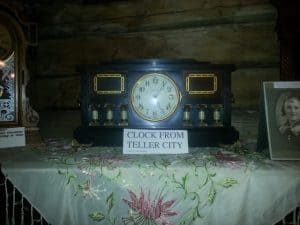 The winter of 2017-18 (last winter) was my 3rd in the McCall, Idaho region. Each winter develops its own character – some are cold, some are colder; some are wet, some are wetter! I found this winter I used about 1/2 the propane I’ve used in the two prior winters, and it was not particularly mild for much of the winter. Some of these savings inevitably can be attributed to the new camper (Glacier Peak’s are better insulated than Crossroad’s), but I’m sure part of it can be attributed to the skirting.

The skirting itself held up extremely well. Unintentionally I put it to a test – one that I could not have planned on. By early February, I had decided I was going to leave the McCall area around Feb. 23rd. I was pleased to see a mid-February thaw develop. I believed that would make it far easier for me to break camp as early February snow depths around my camper were around three feet.

The thaw came – and despite forecasts for it to continue, the thaw went. I was hoping to remove my skirting as close to my departure as possible as most nights were still in the 10’s even during the thaw. Luck was not to be in my favor. About a week before my planned departure, the weather pattern changed and temperatures plummeted and I had not yet removed my skirting.

Now I had skirting that was “cemented” to the pavement below as melted snow (water) had frozen as ice and formed an adhesive layer between the skirting and the ground that felt as strong as super glue! With the assistance of a hair dryer (to melt the ice), I succeeded at breaking the bond between the skirt and pavement (at times inch by inch), but there were a couple of stretches where you just couldn’t get in to do this work. So… it came down to “elbow grease” – that is, pulling on the skirting frozen to the ground until something gave! Fortunately, and to the credit of the quality of the material used, it was ALWAYS the adhesion that gave way before the skirting did. Yes, there are a couple of small areas where the skirting looks “scraped”, but in no way is the integrity of the skirting compromised. I continue to feel real good about my decision to go with this product and the company that installed it!

My anticipation is this winter, I will settle someplace and NOT move until the REAL thaw!

Like the content? Want to receive updates as I produce new articles and reports? Join me here…

73 thoughts on “My Search for a GREAT RV SKIRTING Solution”