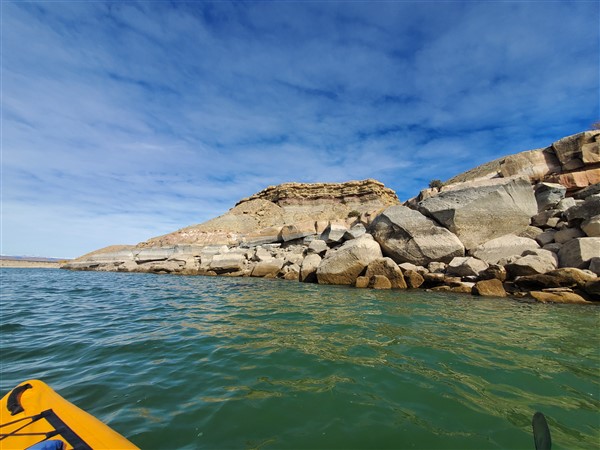 No, this post is NOT about my diet! I’d like to share some info with you about a really special State Park in Utah. Starvation Lake State Park – An OFF SEASON Visit

Starvation State Park is a phenomenal place to visit, especially off season – with certain understandings. What understandings? It can be a windy place! Other than that minor issue, read on for details.

Spending a week at Starvation at the end of October

October 25th and the time had come to leave Vernal, Utah. I knew I was “due” in Draper on November 1st (the mountains and the upcoming ski season were calling!) So, I had a week to travel and perhaps do some additional kayaking before an early winter was due to set in.

My timing proved to work out well. I was able to put my new kayak (see the 2nd half of this post to learn about it) into Starvation Lake on each of 4 days during my weeklong stay. It wasn’t warm any of these days, but I have grown heartier as I decided to put in to the water with temperatures barely reaching the mid-40’s. My only two requirements to head for the lake (about 100 feet from my camper!) are light winds and strong sunshine. (Still working on my late season tan!)

Starvation State Park (Now Fred Hayes State Park at Starvation Lake) is located right next to the small town of Duchesne, Utah. As you travel west from Vernal, you’ll be on the road for about an hour before reaching Duchesne. The state park is literally just another 5 minutes or so outside of town.

Off Season RV Life at Starvation

Inside the park, I stayed at the Beach Campground. These are premium sites offering waterfront and beach access. In season, these sites are often fully reserved.

The park has two campgrounds with hookups (water & electric with a central dump station) and three primitive camping areas (and they ARE fairly primitive) scattered about. If you’re thinking of the primitive areas, you may wish to speak with a ranger FIRST or visit the areas before taking your camper to them.

The two areas with hookups are “tame” and easy to access. The Beach Campground is normally $28/night, but as the water had been turned off and the modern restrooms were shut for the season, the daily rate was reduced to $18. The rates are reduced from mid-October until April 1st.

For most of the week, I was the ONLY camper in the entire park! There were some other fish and wildlife employees staying in cabins and apparently doing some water or fish sampling in the lake.

As I noted earlier, the park tends to be quite windy. This impacted my ability to kayak on a few days as while it wasn’t very chilly, the wind made it less comfortable.

In addition to kayaking, there are other recreation activities available in the park, not the least of which is taking a walk or going for a hike!

The town of Duchesne

Duchesne is a small town, but it DOES have a few highlights worth noting. There’s a nice riverfront park at the southern end of town, a good BBQ place that was apparently closed for the winter, a decent and an iconic diner called Cowans Diner (with a “route 66 ‘esque type sign in front of their diner.)

Even though my low carb diet prohibited it, I noted she has fresh baked goods that smelled wonderful, along with breakfast and lunch offerings – each of which is essentially home-made.

Duchesne also has a supermarket. My best advice: stock up on food at a better grocery store before you arrive. When I visited “Al’s Foodtown”, I found lots of rotting produce and meat beyond its “use by” date.

When it came time to leave Starvation, if you’re heading west towards Heber City and Salt Lake City, you’ll first encounter the Uinta Mountains. You’ll start at 5500 ft. elevation in Duchesne and then climb to a peak at just over 8000 ft. You’ll reach the peak just beyond Strawberry Reservoir which is itself a great place to camp – but not after mid-October as the camping areas all close.

Thanks for visiting today!

4 thoughts on “Starvation and Coffee…”