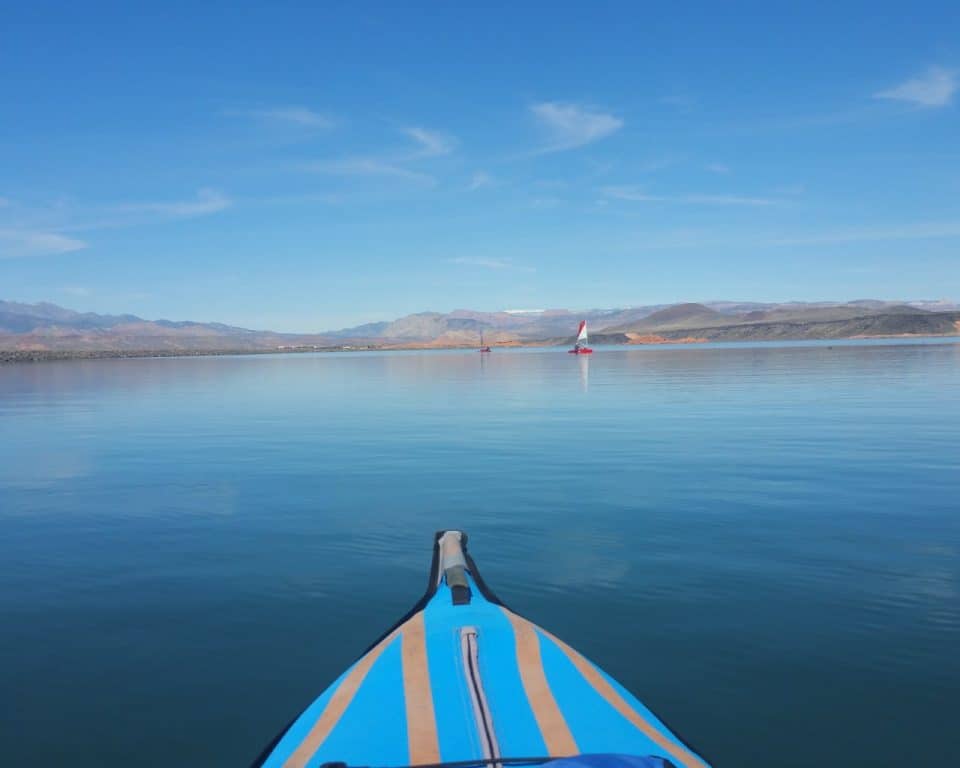 God has a unique sense of humor. You see, I had been prepping all winter for a ski exam in Central-West Idaho mountains. This meant MANY extra hours on the slopes, and skiing in virtually all kinds of weather. Through much of this time, we experienced a mild and relatively snowless winter… until I was ready to depart McCall and head for the exam site with my camper. Literally just a few days before my planned departure, it started to snow and snow and snow. This led me to share my winter RV camp “breaking” experience HERE.

As you may have read in my previous post, I traveled safely to Ogden, Utah on Feb 23rd, took the exam (that’s a story in and of itself), and after a few days of r&r in Ogden, was ready to head SOUTH for some early Spring weather.

To break up the drive south to St. George, I chose to spend 2 nights in the small town of Fillmore, Idaho and stayed at Wagons West RV Park (highly NOT recommended). On my arrival day and 2nd day in town, temperatures reached the 50’s (yay!), but on my last night, after seeing it at around 50F at 10pm, I awoke to about 10 inches of new snow at 8 am – and ultimately a FOOT of snow by 10am (and the campground NEVER BOTHERED to plow it!!)

I was determined nevertheless to get out of “dodge” and head to St. George, where I KNEW the ground was snow free.

As you can see, conditions went from bad to worse as I climbed out of Fillmore. Had it not been early March and daytime, I would NEVER have attempted a drive with a trailer in heavy snow. I knew enough about the sun and the time of year to expect relatively clear roads despite the lousy weather conditions.

Yep, it HAD to happen on my planned departure day from Fillmore – and will LIKELY be the LAST significant snow I see until next Autumn.

As you saw, conditions eventually cleared and by the time I arrived in St. George, it was sunny and over 50F. As I write this, I have now been in St. George for about a week at Sand Hollows State Park (HIGHLY recommended), and soon another week at Zion Gate RV Resort.

This region (St. George) is growing! Its a very pleasant place overall, but I know that by mid-May (and until Mid-October), its hotter than hades! But for now, kayaking and bicycle riding have become a daily activity for me – and even a day or two of skiing at Brian Head, just over an hour north (and 7000 ft. higher elevation! (and that’s the BASE of the ski area).

There is an extensive network of “multi-use” trails (bicycle trails) in the region, and two bodies of water (at the state parks) where kayaking is a great way to pass the time (and get in shape!)

Lastly, the River Rock Roasting Company has become a bit of a hang-out for me as its a great place to take in the scenery (it borders a canyon) and be inspired to share these thoughts! I’ll share a bit more about Sand Hollow State Park in my next post.

For now, enjoy your day. Please consider connecting with me by subscribing to this page (look for the subscribe link) and/or meet me on my Facebook page and subscribe there.

10 thoughts on “From Winter to Spring in 2 Hours”