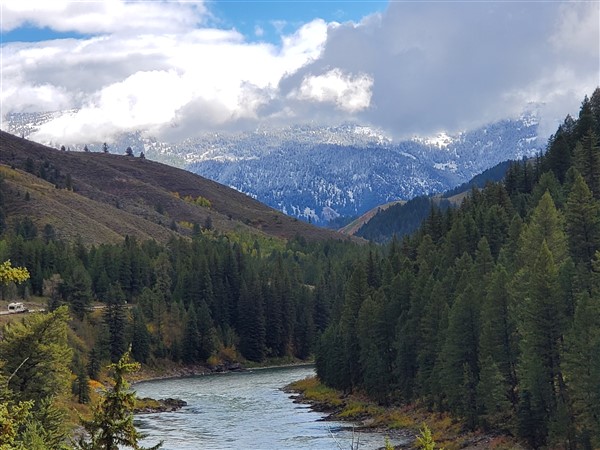 Just as I began to think about preparing for winter – and where I’m going to teach skiing this winter, I encountered SNOW on my way to Jackson on Sept. 20, and with the leaves in full color – it was an INSPIRING drive! I truly hope you enjoy the video highlights of my drive and the photos in this post.

I wasn’t headed to Jackson for any great purpose. I started in Ririe, Idaho – where I was spending a couple of weeks in the Juniper Campground – which is incidentally a GREAT value at $25/night for full hookups. Two of the three loops are “first come – first served”, so arriving mid-week was key! Even in late September, weekends are filling up. You’re not right next to the reservoir, in fact at most sites, you can’t see it, but its nearby!

As a side note – many rv’ers are voting with their feet as they choose to populate rv parks like Juniper with reasonable rates in preference to those who have hiked their rates – ever since the beginning of the “virus” and the “rv feeding frenzy” that has occurred since May 2020.

My trip to Jackson really had just 3 objectives – a chiropractic adjustment (JH Backcountry Health has two of the best chiropractors I’ve ever encountered!), lunch with a friend from ski school – we both have “alternate” plans for the winter (news soon on this!), and picking up some provisions only available at Jackson’s grocery stores – other than that, I try to NOT spend a lot of time in Jackson!

As with many of my posts, it takes me some time to complete them! Its now Oct. 6, I’m in Lava Hot Springs, Idaho. Since my travel to Jackson, I’ve been to Utah, attended my first PSIA (ski instructors thing) training of the season (not on snow), spent a night at Bear Lake (I LOVE it there OFF season), and now to Lava (great pool for recreation and outdoor hot springs complex in the center of town!)

The weather over the past 2-3 weeks has been SPECTACULAR – a true indian summer (can you still say that these days?!) Mornings near freezing with afternoon temperatures peaking into the 70’s. It all ended yesterday, Oct. 5 as I paddled on the reservoir at Soda Springs – which has a reasonably large parking area on public land – next to the water – and… since its public access its FREE for rv’ers to stay overnight (probably up to 14 nights.)

I’d be staying there in Soda Springs instead of at the over-priced campground in Lava I chose were it not for what’s coming – 4 days of clouds and rain, then colder, then SNOW! Things likely won’t get back to “near” normal with highs in the 50’s before about Oct. 15! Essentially, this is going to be a prolonged ARCTIC outbreak (the coldest morning will likely be in the mid-teens) for this time in October. The snow may stick (briefly), but its not “here to stay”.

It is however for me a “reminder” that I need to bring my travel to an end soon (for a while) and settle in for the winter at a campground where I can deploy my RV skirting and secure a 120 gallon propane tank to heat the underbelly for the coming winter. My site & propane tank are now secured!