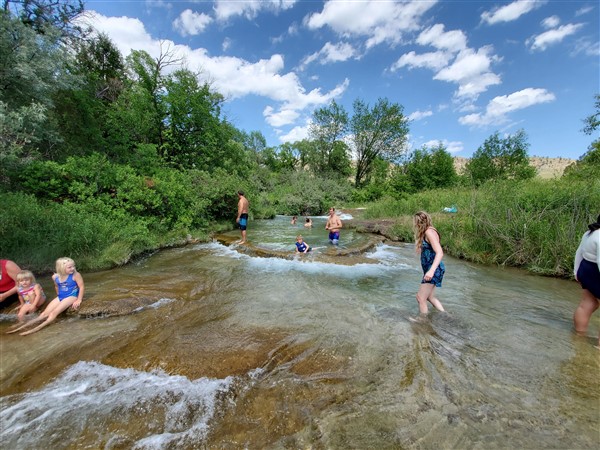 As Summer approached, I knew three things – it was time to move on from Guernsey, Wyoming; I need to be in Rapid City by July 2nd, and I need to order a new truck (now on order.) More on my truck story later. Guernsey is great but honestly, it was getting old… so, I packed up just after Memorial Day and headed north and east. I landed in Edgemont, South Dakota.

Edgemont, SD – a really nice community AND a great place to make “base camp” while exploring the Black Hills of South Dakota

The Black Hills are a VERY popular tourist destination. To get a spot in many of the campgrounds near Custer, Hill City and Deadwood (see map below), you have to plan months in advance (booking your site often within hours of the window that marks the opening of summer reservations.) Not so with the two campgrounds in Edgemont. Both have been mostly empty for the entire duration of my stay here in town – which is now approaching a month!

There are two campgrounds in town – one on Main (2nd) St. run by the town and one at the Fairgrounds “across” town – about 6 blocks away. The town is basically a grid about 7 blocks long and wide. To stay at 2nd St., call (605) 891-9728. To stay at the Fairgrounds, their number is 605 890 3037. Neither is much to look at – remember its not the campground you’re after, its the proximity to all this region has to offer. Both campgrounds charge about the same – $125/week or $425/month for full hookups. The city run park has a shower house. (These rates are FAR less than you’ll pay in Hot Springs or Custer.)

Both campgrounds fit my definition of great places to stay on this basis: They are QUIET, SAFE, and near MANY great places to recreate and visit. Simply put, Edgemont is a great “launch point” for exploring the Black Hills (Hot Springs, Custer, Custer State Park, Wind Cave National Park, Crazy Horse & Mt. Rushmore monuments and much more… I’ve spent time in Stockade Lake and Angostura Reservoir kayaking – each is 30 – 40 minutes from my location. Custer is interesting because its about 1800 ft. higher than here, but only a 40 minute drive. A great spot to “beat the heat” when temperatures in Edgemont head well into the 90’s as they have these past few days. So… you get to stay here and your travel into the hills is measured in minutes.

Eats and Drinks in Edgemont…

Want a coffee in the morning? Perhaps some breakfast? Or a beer in the afternoon? Shoot some pool or listen to music and drink at night, and on Thursday, Friday, and Saturday evenings – treat yourself to some great, no… exceptional (really) pizza! You can do it ALL at the Igloo on Edgemont’s main street. It doesn’t look like much, but I’ve met the four (now 3 – see my video) partners, Diego, Cad, Rich and Stubbs – all good guys who definitely are working to put Edgemont back on the map.

Two doors down is the Hat Creek Restaurant (owned by Cad and Stubbs) – a very good, casual and inexpensive lunch and dinner place (that also serves beer and wine.) Say hey to the owners for me if you drop in! A few doors to the north, is the Victory Steakhouse – great atmosphere but that’s where it ends (unfortunately.)

LOTS to do in the Black Hills…

If you’re a regular reader, you know my passions include biking and kayaking. Edgemont is PERFECT for biking as the town is mostly FLAT. Roads are very lightly trafficked. Further, Edgemont serves as the gateway to the Mickelson Trail – a 108 mile trail that traverses the Black Hills. There are additional riding opportunities on nearly deserted roads, including “Old 18” (designated as 18S) which starts out flat and begins a gradual climb into the Black Hills. Of course, I’m now TRIKE riding – see my post HERE on that topic!

If Kayaking or boating are your thing – Angostura Reservoir (just south of Hot Springs) and Stockade Lake (just east of Custer) are great spots! Both are about a 40 minute drive from Edgemont. Angostura (a LARGE reservoir) has two free entry points – one in Sheps Canyon, the other off the gravel road to Olerich’s (labeled as county road 6 to 6D.) Both sites also offer FREE RV camping on a first come, first served basis, 14 day limit. Verizon cell access is very good at both locations. I opted to not dry camp while in the area as there have just been too many HOT days this June! So, my next move is to Sundance, Wy. and then to Rapid – but at all times, I’ll have full electric and access to air conditioning!!

Custer State Park is just east of Custer (about 45 minutes from Edgemont), and Wind Cave National Park is just south of Custer State Park. You’ll find bison in both along with eagles and other wildlife. There is a wildlife loop in Custer you can drive (there’s also many hiking opportunities along with a few lakes.) Tip: Look for the “4 Mile Draw” road. It is a spur off the wildlife loop. The road is gravel, winding and narrow, but you may be rewarded (as I was) by running into (literally.)

Thinking of RV camping IN the state park? First, you’ll likely need reservations WELL in advance of your stay, AND… Be sure to check reviews (a great site is campgroundreviews.com) to get the REAL story on whether you can fit into the site of your dreams. Recreation.gov designations for acceptable lengths are NOT always accurate!

Wind Cave has 3 distinct cave tours and its own spectacular terrain to explore. Located just north of Hot Springs. I tried to do a cave tour by arriving before 9am on a Wednesday – nope! Lines were LONG and the parking lot was FILLED. I may try again later in July.

Touristy Towns to spend your money in…

Hot Springs is about 25 minutes from Edgemont; Custer is about 40 minutes. Both have good eateries, hardware stores (though Edgemont does have its own hardware store, and if you need mail, a post office.) Custer is situated at over 5000 ft. so, if you need to cool off, go there!

Hot Springs is also home to the Mammoth Dig Site – a phenomenal, active research center that was once a sink-hole that filled with water and served as a “trap” to many Wooly Mammoths and several other types of animals and is now an active dig site where you can see the work of science ongoing. There are even programs for the general public AND KIDS to get involved.

Located just south of Hot Springs – and near Sheps Canyon (see video above) is Cascade Falls. Known to locals before the government put signage up, its a great watering hole (free!) and has small water falls running through it.

Deadwood is another hour and a quarter from Custer. Deadwood is famous for lots of hotels, tourists, gambling, and more. It is not far from Sturgis and Spearfish. The big town in the region is Rapid City, about a 90 minute drive from Edgemont. Every chain store and Walmart can be found in Rapid. Rapid is also home to Americas Mailbox, the mail forwarding service I use.

As you study a map of the region above, you’ll find Edgemont in the SW corner, providing good access to Hot Springs, Custer, and the State and National Parks. Sundance and Rapid City provide access to the more northerly parts of the region, though from one end to the other, almost all drives are under two hours from one end to the other. Rapid City, not on the map above, is about a 90 minute drive from Edgewood.

Need RV Accessories? Check out what I have actually used and certify as EXCELLENT products – and at the right price! Click the image below…

Like my content? Want to be advised of upcoming posts? And there’s some good topics coming! Gas Absorption RV fridges – and potentially some viable alternatives; More insights and insider tips on the latest in the RV industry; The Northern Black Hills and… of course MORE stories from the road in what has become the longest journal of my life!

2 thoughts on “Edgemont South Dakota: Gateway to the Black Hills – and a great place to make your ‘basecamp’ while exploring the region…”