Its been described by some as a “white knuckle drive”; by others, as a “thrilling and exhilarating drive they were glad they did, but wouldn’t want to repeat.” …And these comments were from those who crossed the Teton Pass in the Summer! To me, its the most scenic COMMUTE to work in the nation! Yep, I travel the Teton Pass several days each week – all winter long.

The Teton Pass connects Wilson, Wyoming (and the Jackson Hole/Teton Valley region of Wyoming) on the east side with Victor Idaho (and the Idaho Teton Valley region) to the west. Both valleys serve as home to folks who live at about 6200 ft. above sea level. The pass peaks out at 8432 ft (on the road.) Backcountry ski trails, accessed by human effort reach significantly higher elevations.

I’m spending the winter in Victor while my work (ski instructing) is at Jackson Hole Mountain Resort – across the pass. RV sites are almost non-existent during the winter in Wyoming’s Teton Valley, so for those who wish to RV and work in or near Jackson, Victor is one of the best options. In fact, on dry roads, my commute is only 23 minutes door to door (Village Rd. Transit Center.) And my experience thus far on most days with snow (and ice) covered roads, it’s still only 30 – 35 minutes – far less than many commutes experienced across our nation. Mine has one exception: I’m climbing over 2000 ft. on 10% grades (on both sides) and get to travel one of the most scenic routes in the entire nation (see accompanying video.)

On a personal note…

This is the time of year where I settle into one location for a few months – and considering its Victor, Idaho, once the snow falls, you’re increasingly snowed in (the trailer that is), so I make no attempt to go anywhere between November and the end of March. And… why would I? Jackson Hole offers some of the BEST skiing and terrain in all of North America! And…on the days where I just don’t want to drive, there’s a commuter bus that runs from Victor directly to the Stilson Lot (Village Rd. Transit Center), where you can get a free bus to the ski hill and its 4100+ ft. of skiing!

I still take calls for my Concierge RV Buying (and Selling) Service in the winter, but the RV business does slow down for a few months. As I write this just before Christmas, the mountain has been quiet, but the Christmas crowds are coming – soon. Today was a chilly morning (about -5F), but it warmed to 20F quickly and I went cross-country skiing in Driggs. All I was wearing was a couple of shirts and my Scott-e-vest – now in its second season and holding up as ‘like new.’ (See below to see what it is.)

As the season progresses and the weather cools, I’m looking forward towards wearing my ScotteVest – an incredibly durable and versatile garment! I’m finishing up this post today as an autumnal storm is headed my way – and I decided to share this great clothing manufacturer with you and encourage you to click the image below to see what they offer – and perhaps whats on sale! (the quest vest pictured below is the SAME vest I own)

(the quest vest pictured below is the SAME vest I own) 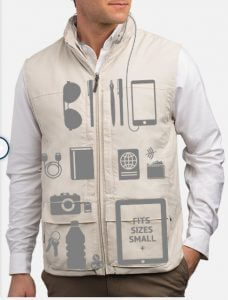 Teton Pass: There ARE Hazards

Honestly, perhaps the greatest of which are other drivers. There’s the driver who’s afraid of his own shadow and crawls down (or worse yet UP) the pass, and then there are the dare-devils who want to pass on 10% grades covered with ice and snow! These can be managed as you learn who’s who on the road, but the big one that you can’t really control is the occasional avalanche (snow slide.)

I have a video of the first CONTROLLED slide of the season. It’s controlled because the road crews bomb known trouble spots (spots where slides are known to occur) and try to bring snow down BEFORE it happens on its own – which is where the TRUE danger lies. For this particular slide, they closed the road at 3am, set off the explosives, got a slide to occur at Twins (Just east of the top of the pass), plowed the road and had it opened by 6am – just in time for the morning commute!

All of the above is the road crew’s GOALS, and not what always happens. Last year, a skier skiing above the road triggered a slide just at the beginning of the morning commute! No one was injured (to my knowledge), but it inconvenienced hundreds (thousands?) of drivers heading across the pass to get to work. Incidentally, many who work in Jackson opt to live on the “Idaho side” due to lower housing costs and the availability of more spacious places.

Last year, a particularly gnarly year for travel (but it made the skiing amazing!), the pass was closed 19 days. I knew this going into reserving an RV spot in Victor, but also knew that last year was an “outlier” and not likely to repeat. I’ve also been told that two drivers vehicles did get buried in slides and there’s now talk of requiring drivers to have a beacon in their vehicle to cross the pass so the driver and their vehicle can be quickly found after a slide. Again, the road crews bomb the trouble spots regularly to minimize natural (or skier assisted) slides along the road.

For those who are thinking of a short term visit to this region to ski you have Jackson Hole Mountain Resort and Snow King on the Wyoming side, and Grand Targhee on the Idaho side. Targhee is located in Wyoming, but is only accessible by driving through Victor to Driggs then east to the “end of the road” at about 8000 ft where you are greeted by the Grand Targhee Resort.

The Teton Valley Resort definitely has space for RV sites and cabins all winter, and Base Camp, where I’m staying MAY have short term space (if interested, get with me on this and I’ll reach out to the owners.) Both are in Victor. Base Camp is a 5 minute walk to the commuter bus that crosses the pass every weekday, Teton Valley Resort is about 3/4 mile from the bus.

Unless you have a 4×4 vehicle OR chains AND know what you’re doing on STEEP, winding mountain roads, I do not recommend trying to drive across the pass on most days. Further, if you are pulling a trailer to get into Victor, you can NOT cross Teton Pass with your trailer until mid-Spring. If you do and you’re caught (it happens to 18 wheeler truckers regularly) the fine is steep! This restriction goes into effect in November each year.

Idaho’s Teton Valley – the towns of Victor and Driggs

Each community has just under 2000 residents and plenty of space! I’m enjoying my time in Victor. From my Base Camp location, I can cover the entire town on foot in a few minutes. Victor has several really good (and reasonably priced) restaurants – the Knotty Pine Supper Club (dinner – ribs, bbq, etc.), The Brakeman (burgers) Pompanos (breakfast/lunch), Butters (breakfast/lunch and Italian dinners) are three I’ve visited and been impressed with. The Knotty Pine reminds me of an old New England pub/restaurant with house brews and a great atmosphere. There is a small (but well-stocked and high quality) market in town. A larger grocery store is just up the road in Driggs (Broulims) with competitive prices AND you can still get bags at checkout.

There are a couple of (free) places to cross country ski in Victor – one is even groomed at Teton Springs Lodge with 9 km of groomed trails. The laundromat in Victor is reasonably priced and rarely crowded (and clean!) And the post office goes “above and beyond” to assist and accommodate.

Driggs has a tailor/seamstress along with a clothing store and a ski shop. Victor has a consignment shop with previously owned ski clothing and equipment. She takes a 50/50 split with those looking to consign their goods.