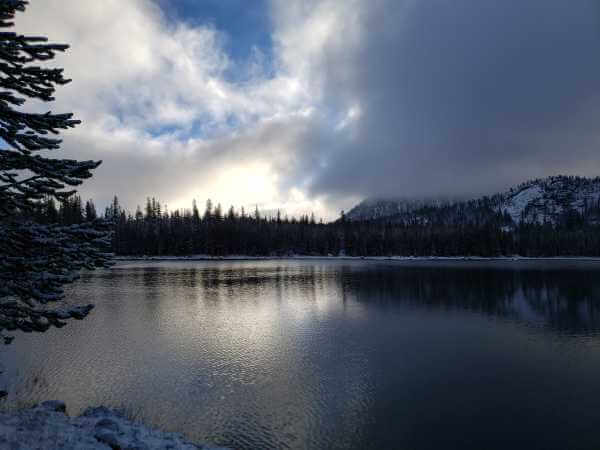 Dateline: October 30 – a damp, but promising early morning in La Grande, Oregon with a planned (short) hike around Anthony Lake (about 35 miles away.) Temperatures in La Grande were reasonably mild (mid 40’s) with the promise of some sun during the day. As autumn has definitely arrived here in eastern Oregon, I decided with the promise of some sun and the knowledge that I had a truck service appointment in the afternoon, I headed out early to Anthony Lake to check it out and take the 1 mile (or so) loop trail around it.

La Grande and my reason for being here…

Incidentally, I am here in La Grande, Oregon and my travels are temporarily “on hold” as my Glacier Peak is in for needed repairs. I will detail more soon, but safe to say, ANYTHING with humans involved in the construction process is subject to mistakes being made. That said, none of the errors during the construction phase a year ago caused anything catastrophic to occur AND to me, the MOST IMPORTANT factor is how the manufacturer (Outdoors RV) is handling the repairs. Bottom line for now – they’ve stepped up, “owned it” and are making it right. The only cost to me is a few days of my time… and this is what enable me to go hiking around Anthony Lake (and incidentally find a few great restaurants and a chiropractor who is “straightening me out” after not having an adjustment since leaving Casper around August 15.

I had not been to Anthony Lake (adjacent to Anthony Lakes Ski Area), and really was not thinking about the elevation gain or any concerns regarding it. As I turned off I-84 about 20 miles outside of La Grande, I began to climb and note the temperature drop – towards freezing. A mild concern as the roads were still damp from the prior nights rain. Being from the northeast, I am very familiar with black ice and slowed down accordingly.

Black ice soon however left the zone of my attention as I noted SNOW begin to accumulate along the grass on the side of the road – and then very soon thereafter ON the road! Temperatures had fallen into the upper 20’s and by the time I reached Anthony Lake, the temperature was 25, it was snowing, and when I stepped out of the truck, there was at least 2″ of fresh snow everywhere!

Fortunately, I had a pair of cross country gloves stashed in the truck and had grabbed a spring jacket (along with the 2 layers I already had on), I felt confident about doing the hike and remaining warm enough – even if I made a “wrong turn” and ended up outside for far longer than I anticipated.

The lake, of course was not frozen; but the ground was surprisingly firm (I kinda wished I had brought my cross country skis with me – there was ALMOST enough cover to start skating around!) The hike is an easy one (hey, before ski season I’m not looking to kill myself!), and traversing on the snow made the travel softer than hard dirt/rock! It was also VERY pleasant to be out in the sting of sub-freezing temperatures with fresh snow on the ground and a hint of snow falling around me. I was tempted to break out the kayak, but thought better of that activity given the conditions! (Although I DO have a kayak with me at all times and the required accessories like water shoes, a pump (its an Advanced Elements inflatable kayak), and other safety equipment.

My visit to Anthony Lake (elevation 7100 ft) was ultimately all too short and I headed back down the same snow covered road to get back to the valley later in the morning. As far as the rest of LaGrande, if you ever need a motel, I recommend the Royal Motor Inn; the “Local Harvest” is a good local restaurant, and believe it or not, they have what is probably the best Denny’s I’ve ever been to! (And I’m typically NOT a fan of Dennys!)

One way or the other, I expect to be moving on either in about two days or after the weekend. I will be starting a series soon on my travels across Washington & Oregon during September & October 2018. If you enjoyed this, please visit my other posts – and you can connect with me via my Facebook RV Group or my RV Across America page on FB or my new group in MeWe.