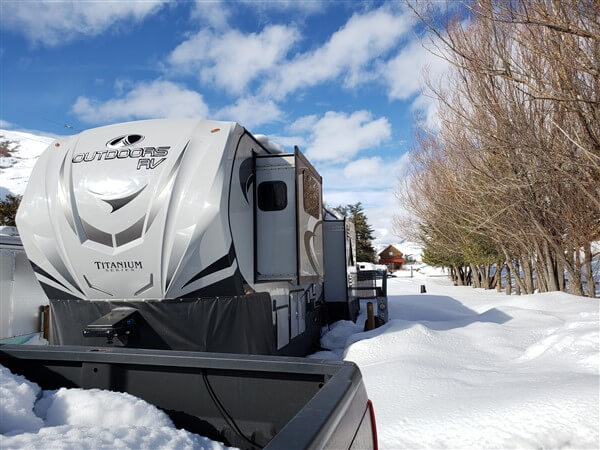 Its amazing what a little sun and temperatures just a few degrees above freezing can do in March! My camper is still quite buried in deep snow, but with a few days of strong pre-Spring sunshine and temperatures above (or at least NEAR) freezing… the snow pack WILL fade away.

Its been a long winter here in Jackson, Wy…

Even though we are (just) west of the Continental Divide, its been a long, cold winter. I rushed to get here in very early November to set up camp with my 5th wheel ahead of a winter storm. Snow has been on the ground virtually since I arrived and little of it has melted.

The ski area where I’ve been teaching (Jackson Hole Mountain Resort) all winter has recorded nearly 500 inches of snow – and I’m certain there’s more to come. Here in the valley, at about 6000 ft., most snow from here on will melt in a matter of hours or a few days – barring an unusual cold weather outbreak!

*In fact, just after clearing my 5th wheel’s roof AND enjoying an afternoon that reached 40F, we now have a Winter Storm Watch up for tomorrow! BUT, as noted earlier, the snow WILL melt fairly quickly with ANY sun and warmth.*

I still have about 3 more weeks of ski teaching but I’m willing to admit I’m ready for spring! I’m feeling the itch to get on my bicycle and kayak and hit some refreshingly cold waters!

A quick video message then an update on my health… after all, I DID have a heart attack just about 3 weeks ago –

Recovery from what turned out to be a MODERATE heart attack

My prior post shares lots of details about the entire experience and a visit to it may prove valuable as I share how I felt at the time and what I did that may in fact have saved my life (and could yours as well if you have a similar experience.) I will repeat some here but not all. (The video above also hits some of the most core info.)

After reviewing this info, should you wish to help me meet my $10,000+ deductible, I’m accepting funds via a go fund me campaign.

Let me start here – on the day it happened (Feb 12th), I was skiing down an advanced trail at Jackson Hole, my heart felt strong, I was NOT out of breath, I was NOT fatigued, but I DID feel a different sensation (see my prior post) than I’ve ever felt before. Others have told me that the most profound thing I’ve shared with them is just that – when you feel something that is DIFFERENT from what you’ve ever felt before (and its unpleasant) – get it checked out ASAP.

Since then, I’ve learned a few key things…

I expect to be working somewhere in the RV business (from April thru Labor Day), but I still have my Concierge Buying (and selling) Service that I offer year round. While I will not do much touring this summer, I DO plan to tour extensively in September and October before (likely) settling back into the Jackson Hole Wyoming region for another winter teaching at “Teton Village” – a ski area I’ve truly come to respect and appreciate. This includes the incredible supervisory staff and leadership at the ski resort. (Just speaking the truth here!)

While I will not be traveling much for a few months, I WILL be updating RV Across America (.net) regularly. I still have a very extensive post I’m working on that will detail my tour across Washington and Oregon last Autumn. Additionally, I’ll be posting on a construction project I’m doing inside my camper – more details soon on this. I also have several posts in mind on the state of the RV industry as one manufacturer in particular recently garnered over a quarter million dollars in fines due to shoddy workmanship and construction materials. Achieving this in a largely un-regulated industry is in my view quite an accomplishment! Especially when I can easily name several manufacturers who are clearly in a “race to the bottom” and are striving to become the “worst of the worst” – all as WE the consumer pony up our hard earned dollars – in many cases TENS OF THOUSANDS of dollars – to buy these campers. More soon! 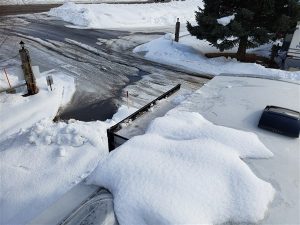 10 thoughts on “Signs of Spring and a Strong Recovery…”