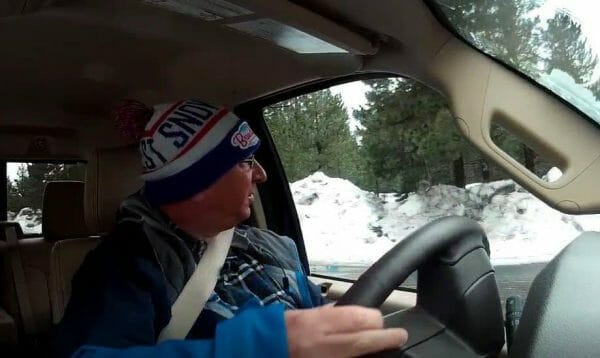 When you’re in your late 50’s AND a traveler, possible heart health issues are NOT good news…

It was late summer 2016 and I started to notice chest tightness developing after just a few minutes of walking – even at a slow to moderate pace. Heart trouble is NOT something that runs in my family so I wrote it off as the result of a summer of relative inactivity as I had spent most of my time selling RV’s and certainly not exercising enough – not a good formula for a guy in his late 50’s who is definitely carrying about 40-50 pounds extra.

My immediate reaction was to “write it off” (sound familiar??) – not a good idea as the statistics tell us that one – in – three of us will die from cardiac disease or stroke – and I KNOW this from my own reading! Heart health is nothing to ignore – and as you read on, you’ll find I did take action! Read on…

I left the RV store after a great summer season just after Labor Day and began my travels in my 5th wheel. I also immediately stepped up my exercise levels! I particularly enjoy paddling on flat water in my advanced elements inflatable kayak (pictured below). As a traveler, living full time in a 5th wheel, space is a major consideration and the inflatable kayak works well for my lifestyle.

I found that a 1-2 hour paddle was not causing the same chest tightness as walking, but despite regular (nearly daily) kayaking sessions, the chest tightness still appeared when I walked even short distances.

My winter gig is working as a ski instructor here in McCall, Idaho, so getting in shape is a priority! This year I arrived on November 1 and enjoyed 2 weeks of unseasonably warm weather and continued my kayaking. Winter weather arrived soon enough however and before the end of the month, I stored the kayak and started cross country skiing on a local golf course (as soon as about 4 inches of snow had fallen and the ground was frozen.) Cross country skiing also led me to some VERY interesting findings and conclusions regarding my chest tightness – read on for the “rest of the story” towards the end of this post.

Also during November, I visited my chiropractor here in McCall (he’s very good – Irwin Mulnick of Back Country Chiropractic) – who also has a background as a nutritionist/naturopath. In our discussions, I agreed to comprehensive blood testing, eventually an EKG. The results came out clean – yay, good heart health… BUT – a “stress EKG” would have been better. The problem? The cost! Over $700. for this test and with today’s insurance mess, I would be paying that 100% out-of-pocket.  Dr. Mulnick also recommended a change in my diet (less junk food, less dairy, more raw foods) for a 2 month period. What follows are my findings – including before and after results, surprising analysis of my health situation, and a summary of what worked.

Incidentally – as a traveler, one of my first tasks when visiting a new location – whether for a few days or a few months, is to seek out a good chiropractor. Having been treated by chiropractors for several decades now, I know what I’m looking for in a chiropractor and can reasonably quickly assess whether one of the local practitioners is right for me. In McCall, Irwin Mulnick has turned out to be an excellent choice.

As you can see, over an 8 week period, there was SIGNIFICANT improvement. And, yes, I was definitely psyched about that! (Note: You can look up normal ranges for each test and see I moved from “extreme risk” to “moderate risk” for heart disease from my initial tests to the second set of tests.) My blood pressure also dropped from 146/96 to 120/70.

Note: There were additional findings, and a few blood tests revealed additional areas where I needed to improve the results, but the two primary areas where work was DEFINITELY needed was in cholesterol results and in blood sugar results.

Note 2: These changes were achieved WITHOUT the use of ANY prescription meds including statins!!

As I mentioned earlier, Dr. Mulnick wanted me on a diet consisting of more raw foods (meat was ok, as were eggs), but less dairy and processed “crap” (high glycemic index foods). Honestly, I followed the diet about 85%. Notably, caloric restriction was NOT a part of the plan. The results? I lost 7 pounds over the 8 week period – again – with NO attempt to reduce calories. I also found my energy levels were better and my mental clarity was better. Honestly, I’d say my ability to remember names is now above average (in contrast to prior years) – which for one who does the things I do and is always meeting new people, is a GOOD thing!

When it came to the supplementation, I followed the recommendations about 95%. Here are the core supplements I took… (links can be found below to the exact supplements I used – most are found on Amazon at discounted prices)

Garlic, Opti EPA, L-Arginine, Vitamin C, Glucoset – The first 4 address the heart, cholesterol and general wellness findings and the last is in response to the high glucose result (along with Opti-EPA as well.)

2 scoops/day – 1 in the a.m., 1 in the p.m. (worked well when mixed with water and the arginine infusion above)

As the winter set in, and before the season really began at the downhill (alpine) ski area, I took time out of most days to do about an hour of cross country skiing. I discovered a few interesting things – first, thanks to one of those handy pulse/oxygen meters  (see below), I was able to track my pulse when exercising and it never reached unusual or dangerous levels. Further, I found that in the first few minutes of starting my exercise, my chest tightness appeared – and then upon continuing the exercise it went away!

I reported this to Dr. Mulnick and also shared I’ve had 2 falls in the past 3 years while skiing “off piste” (in the trees/glades) where my ski caught a stump (or root or something nasty) causing me to fall (quickly) face forward. In each incident, my chest landed directly on my skis/ski poles. In the first incident, I certainly either broke a couple of ribs or injured them. Fortunately, when it happened, it was already early April, so, it simply caused a rather unceremonious end to the ski season! But – there was lasting damage…

Dr. Mulnick proceeded to check the alignment of my chest ribs – and there it was… at least two were out of alignment. I must say the subsequent adjustment was NOT as routine as the back and neck adjustments I’m well used to, but after the adjustment – the chest tightness began to subside!

I now can walk from the ski school building to our rental shop, a distance uphill of about 2 football fields in ski boots (did I mention UPHILL while carrying skis and poles) at an elevation of 6100 ft and experience minimal exertion, and NO chest tightness!

There is no doubt I have MUCH room for improvement. As I mentioned earlier, another 40 to 50 pounds lost would be great. I have continued the recommended diet – mostly – fresh veggies, fruit, meats (light on the red meat), and minimize the processed sugars. Simple, huh?

One of the GREAT advantages of living in a RV is the ability to control your diet by purchasing and eating good stuff. You have your own fridge, kitchen, and dining area – and it sure beats eating out (most of the time!)

I hope by reading this account, you get motivated (if needed) to get bloodwork done, and if your blood chemistry “could be better”, you make the necessary changes in your lifestyle – activity level, diet, and supplementation to effect change. It doesn’t take long to see real and concrete results. I will likely get more bloodwork done in November 2017 and see if continued improvement is noted – if not, I’ll make “course corrections.”